While cleaning up our Message Board (internet trash postings for magic pills and everything else tend to accumulate over time) I came across a couple of old sailors and club members from the 70’s who had posted.

I’ve copied their postings here and invited them to join our blog and Google Group.

Greetings to all you AK sailors.I have enjoyed reading your message board. I spent several great summers sailing on big lake in the mid to late 70's.

I just got back into sailing this summer. I bought a merit 23 and sail it here in Colorado.

My father (Fred) died last New years. As he was dying of cancer he would go in his mind to sailing and all his times on the water to help ease his pain.I have 4 kids and they are loving sailing. If any are still around who remember me you can email me or reply kletka@juno.com

Kris, I remember you being the unbeatable sailor that the kids all admired. Sorry to hear about Fred. Sharon, Ken, and I are living in Vancouver WA. We have an Ericson 29 and a Laser here. Ken is married and had a housefull of 9 kids. He is a Oregon state trooper. We lost my dear friend Dick Evans several years ago.

We had planned to race in the West Marine cup, and it almost happened. Did manage to tour Glacier Bay with him. I guess the sailing club has changed in the last few years, nothing similar to what we had in those days.

We keep up with Ben, Birgit, Henry, and Oliver Robar's and a few you probably didn't know. I would really like to find where Bob Massey and family are. We see Bill & Joyce Ower every now and then.

I still would like to find a Skip here to show the locals how an old boat could perform. We looked over a local sailing club here that was so much like our old club...there were the workers and those that only came to play. Sound familiar? Wonder if the Arctic Roadrunner is still around. Gotta go as it's past my bedtime. Let me know when you get this. AL
Posted by Cat Sailor Paul at 8:06 PM 1 comment:

Thanks to all the members who showed up for
Winter Work Party 07
All the boats, buildings, trailers, and RV's were shoveled off in one afternoon.
Nice job ASC!!! (Alaska Snow Club) 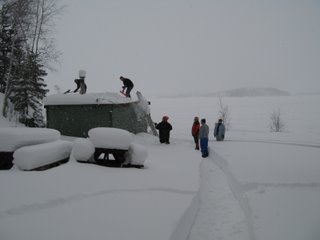 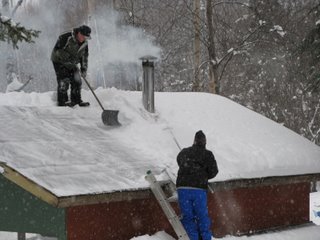 Paul and Jay did an awesome job cleaning off the clubhouse roof. 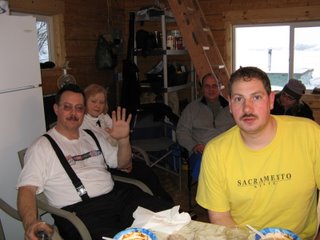 TL, Teri, Jeromy, Jay, Melissa, and the rest of the shoveling crew stopped by the cabin to warm up and have a bite to eat.

Thanks again everyone for coming up and enjoying the sailing club during the winter.

Greetings from the Commodore 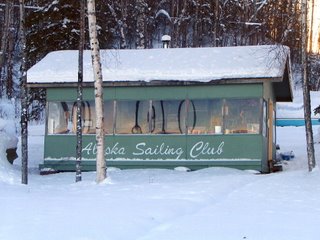 Hello Sailors!
Well here we are kicking off another year for the Alaska Sailing Club. I'm looking forward to a good one. The Goulds decided to do a little snowshoeing this weekend and we found ourselves down at the club. The conditions were wonderful for a walk around Big Lake. We had our lunch in the clubhouse - all is well there. The clubhouse doesn't seem to mind the snow load so far. The walls looked straight and the doors worked fine.
I also looked at the boats a bit and saw mostly piles of snow. I cleared the snow off the Gould boats but they seemed to be holding up great.

We had a Board meeting last Wednesday and we covered a bunch of ground. One of our main topics was the much-discussed bathroom facility. Jeromy Reed, Vincent Browne, and Paul Button, and Tom Gould discussed their plans to date. Much of the discussion was related to the leachfield.
Another interesting topic was the need for a Nominating Committee. According to our bylaws this Nominating Committee will be responsible for setting up a "slate of candidates" that are willing to run for the open board positions. The slate of candidates is voted on by the membership at the annual meeting. It is my responsibility to appoint this Nominating Committee made up of 5 persons. If you are interested serving on the Nominating Committee this year, please contact me.
I'd like to remind folks that all members are invited to the Board meetings. Our next meeting will be February 7th at 6:30 pm in the conference room at CH2M HILL (301 West Northern Lights Blvd [Wells Fargo Bldg] 6th Floor). This meeting should be interesting as we will discuss setting dues for 2007, and discuss a number of projects planned by the various committees. I will get an agenda out to all the members prior to the meeting.

Thanks for your continued support of the Alaska Sailing Club. I'm looking forward to a great 2007 season.

Tim Gould
Posted by Tim Gould at 7:20 PM No comments:

With the all the fresh December snow we’ve had, Taylor and I decided to dust off the old snow machine the day before New Year’s Eve and prepare for some fun on the lake. First this meant we had to carefully remove the 4 foot mound of snow blower discharge from the snow machine and shovel out the trailer.

Of course the sled’s track was also frozen to the ground (poor storage technique Dad – it should be up on blocks!) which required quite a bit of time on hands and knees chipping and prying the beast loose. With that done, it fired up after a dozen pulls and gradually warmed up. I promptly decided to do a test run across the backyard and managed to get stuck – excellent recurrent training for getting unstuck!

Then it’s load the sled onto the trailer and roll it into the garage for a thaw and pre-ride inspection and service. Everything checked good, so with the fuel and oil topped off the trusty 1991 Skidoo Scandic II was ready to churn up some powder.

Early New Year’s Eve we went to the Fire and Ice New Year’s Eve Celebration at the Town Square. It was a lot of fun but extremely cold at 5°F with a biting breeze the whole time. Later that evening we gathered our gear and welcomed in the New Year safe at home.

New Year’s morning was cloudy in Anchorage and about 16°F. The Big Lake forecast was for 12°F with light snow. By 11:00 AM we finally had everything loaded and hit the road. Then the snow began to fall again! The Glenn Highway was single lane, with white out conditions the whole way, so the drive to Big Lake took over 2 hours.

By Big Lake the snow had stopped and the sun was trying to break through the lower clouds. We pulled into the boat launch area at 1:00 PM. By 1:15 PM the sled was off the trailer and warming up. With “Cat Crap” (anti-fog) carefully applied to spectacles and helmet lenses, we suited up and charged across the lake.

With about 3 feet of snow to play in our sled surged ahead with each push on the throttle lever. The road system berms are perfect for a little aerial work, but with two aboard (“veteran” on the back) our workhorse sled is a little too harsh on landings for my taste and my back. We trade off for some solo riding and warm ups back at the Tahoe main base.

The sun comes out and wow, what a difference! It’s easy to forget that it’s 12°F out. There are perhaps a dozen other machines either riding the lake or transiting for access to the outstanding Big Lake trail system. We quickly take a cruise by the Islander. There aren’t any customers parked outside but it looks open with at least one person inside.

Zooming back across the lake at 60 MPH, we veer off the main trails to try some banked turns in the deep powder around the club’s harbor and stop for a couple of photos. Everything looks ok at the club site but all the boats and trailers could use a good snow cleaning.

1/7/07 Update
We rode at Big Lake again and stopped by to shovel off the RL. It looked a little precarious, with a slight list to starboard.

After a late lunch and warm up break we did some more runs and Taylor really enjoyed testing the top speed limits of the Skidoo.

By 4:00 PM the sun was setting and casting a pinkish hue across the snow. It was a great end to a great day. Time to load up the sled, secure for trailering and head back to Anchorage.
Posted by Cat Sailor Paul at 8:56 PM No comments: