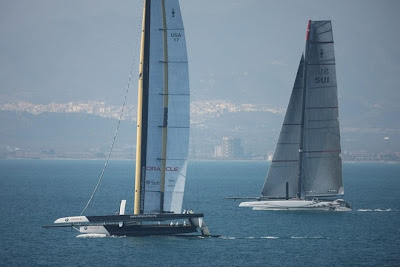 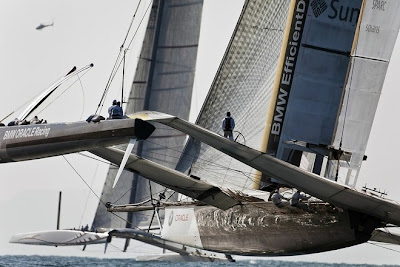 In 2003 Ernesto Bertarelli and his New Zealand 'tight five' led by Russell Coutts and Brad Butterworth, sailed a monohull Alinghi to beat the New Zealanders to win the 31st America's Cup. In 2007 the Swiss syndicate won the 32nd series.
Race 2 video highlights here.
Today the Golden Gate Yacht Club's challenger, Larry Ellison's BMW Oracle Racing USA-17, blasted to victory in the 2010 series. History was made in this 33rd America's Cup for the first time ever; a Deed of Gift Challenger has won the America's Cup.
On Friday BMW Oracle dominated the first race after a spectacular start. Today was an even more exciting day of racing, right from the starting box.
Alinghi were penalised for an early entry into the box. BMW Oracle Helmsman Jimmy Spithill push Bertarelli and his Alinghi crew around the box. BMW Oracle was away fast heading left under pressure, while Alinghi was slow off the start, going towards the right.
BMW Oracle tacked to port back into the centre of the course, she was 350 metres ahead a mile and half across the course. BMW Oracle had more pressure and extended her lead to 500 metres.
Alinghi tacked back onto starboard on a shift, in what would be the first cross in the 2010 America's Cup. Loick Peyron was now on the Alinghi helm. BMW Oracle 'blinked' and they tacked away. Alinghi found the shift and was in the lead by 75 metres.
Alinghi was sailing much better than in race one. It seemed she had a more powerful main and possibly had the leeward hull loaded with water. Alinghi's lead extended to 500 metres as she headed towards the top mark, she made big gains on the right with a 15-20 degree right hand shift.
Alinghi was helmed better with her windward hull steadily stitting three to four metres above the water. Her lead widened to 600 metres, but the breeze clocked back left and the lead reduced to 200 metres.
The pressure was increasing as the two boats headed towards the top mark, with another 10 degree shift to the right. There was then a shift back to left as the two boats closed on the first rounding mark.
BMW Oracle was first to the port lay line, while Alinghi kept sailing to the mark on starboard but her lead was down to 50 metres, then a puff on the right.
Alinghi crossed ahead of BMW Oracle by 100 metres. It was a very slow tack by Alinghi and BMW Oracle ran down her rival to round 28 seconds ahead.
Down the first reach BMW Oracle began to extend her lead; 400, 500, 600, 700, 800, 900, 1000 then to 1100 metres.
Larry Ellison's BMW Oracle's USA-17 was blasting down the leg, consistently two knots faster and her lead was soon out to 1600 metres. She hit a top speed of 33 knots down the 13 nautical mile reach and extended out to 2100 metres.
Down the second reach with the sun setting, Alinghi tried everything but she could not claw back that lead. Doing her penalty turn at the finishing line, Bertarelli crossed 5 minutes 26 seconds after USA-17.
After 15 years away from the USA, from 1995-2003 in New Zealand and then in Switzerland, the America's Cup has returned to America.
According to Italy's largest sports newspaper La Gazzetta dello Sport, Mascalzone Latino will become the Challenger of Record and the 34th America's Cup match will take place in Newport, Rhode Island in 2013.
Alessandra Pandarese, Mascalzone Latino's legal counsel, is reported to currently be aboard Larry Ellison's private yacht Rising Sun, in order to present the challenge.
BMW Oracle's helmsman James Spithill. ‘An Awesome event. To sail two races with no gear issues speaks volumes for the shore crews.
'Going up the beat suddenly we had a boat race; obviously we did not see the shift going as far to the right. It was a really nice lay line call from Mateo (Plazzi) and JK (John Kostecki)' concluded Spithill.
BMW Oracle owner Larry Ellison was smiling broadly as he said ‘I am very proud to be part of this team.'
Posted by Cat Sailor Paul at 3:17 PM No comments: 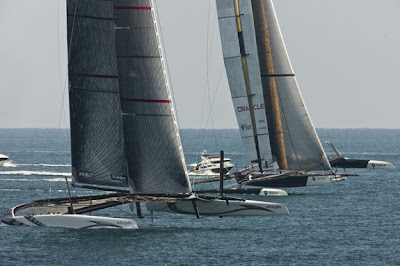 2:35: Racing underway. Penalty on Alinghi in the Pre-Start. BMW Oracle stalled, both OCS, Alinghi gets out first. Early jump to a lead for Alinghi as BMWO has to return.

Quotes of the Day:
Jimmy Spithill, Skipper, BMW Oracle: “I always thought if we were able to fly a hull we'd be faster upwind, but I was genuinely surprised downwind."

Dirk de Ridder, Wingsail Trimmer, BMW Oracle: "Over probably 9-10 knot breeze it’s more efficient without the headsail, and the wing is working at maximum efficiency at that windspeed, and there was no surprise we were better upwind against Alinghi with the wing only....Once we get to over over 10 knots we’re at our absolute best and probably more wind we’d even be better. So good to see in the lighter wind up the first beat we were actually going quite well -- we were very very pleased"

Larry Ellison, Owner, BMW Oracle: "I would have sailed today if they weren’t about to call a race in three-and-a-half knots. If it’s very very light, we’ll sail with minimum crew again. I had intended to sail today and I intend to sail Sunday but not if the breeze is three knots of breeze."

Ernesto Bertarelli, Owner, Alinghi: "The wing seems to be quite a weapon."

Brad Butterworth, Skipper, Alinghi: "What do you want me to say, they sailed from behind us to in front of us."

Jimmy Spithill, Skipper, BMW Oracle, on the pre-start: "I was approaching it pretty aggressively because the wind was quite light -- we did a great job on the entry. We were able to get a piece of ‘em and a force a penalty which was good, but then pretty soon after -- we’re sort of learning all the time -- we had a hard time sorta stopping the boat. We ended up rolling forwards and getting overlapped to windward....

Question: As you came across the line, how did you feel when you started chasing Alinghi down?Spithill: “Pretty fired up, we pushed the boat harder than I’ve ever pushed it before –- I mean right on the edge.....the boat really took off."
Posted by Cat Sailor Paul at 11:30 AM 2 comments:

While waiting for their 90 ft + boats to be built, current America's Cup crews were practicing on these babies!

Posted by Cat Sailor Paul at 1:15 PM No comments:

Since the America's Cup is multi-hull this year, here's an excellent cat clip re youth sailing. Very good camera work and music. I gotta get me one of those kites!

Posted by Cat Sailor Paul at 12:54 PM No comments:

If you haven't seen any media on this year's competition - it's worth a look. Lots of lawyers involved and so, they're racing multi-hulls in a best of 3 match race format. Check it out here for the overview.
Posted by Cat Sailor Paul at 10:58 AM No comments: