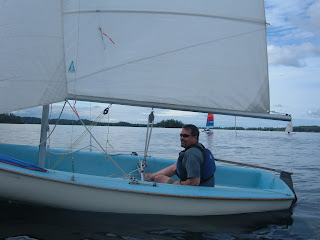 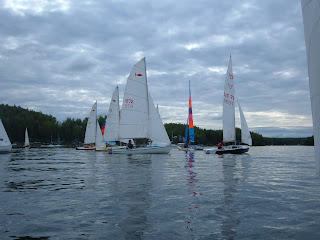 Start line for the fleet. There were 13 boats. 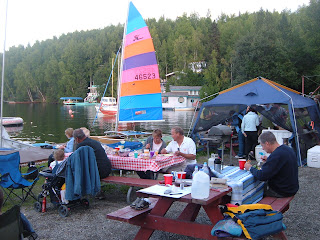 Good eats after the 1st day of racing. We do enjoy eating, yum,yum..... 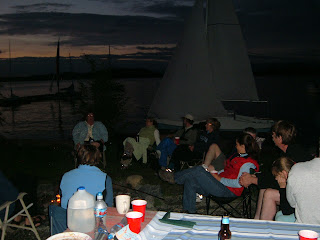 The daylight is waning, the campfire lit, life is good. What happened to the days of June, when we are sailing at midnite? 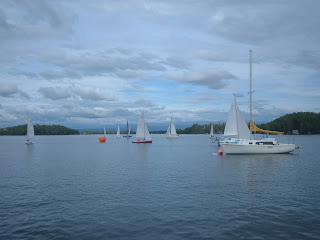 Someone is crossing the finish line, good job!
Posted by Onthewater at 7:23 PM No comments:

2007 marks the 41st Anniversary of this classic race series. Races begin on Saturday September 1, 2007 continuing through Sunday evening September 2, 2007. This race has been held continuously, every year since the club was founded. Come out and enjoy the competition by participating, helping out or just viewing from shore while enjoying our last regatta of the 2007 season.

Posted by Cat Sailor Paul at 9:28 AM No comments: 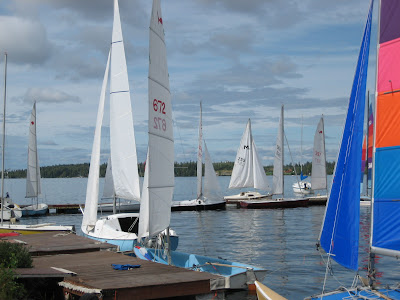 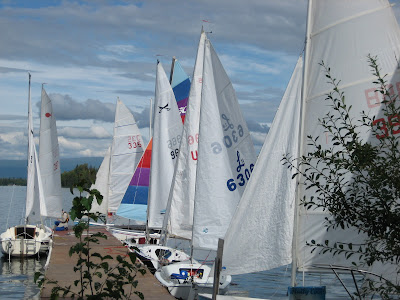 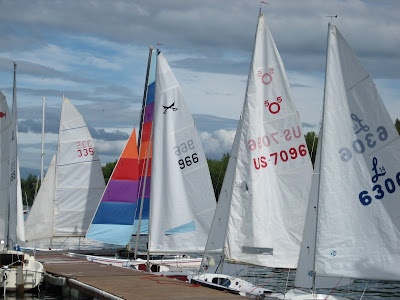 And here's some photos of the record setting fleet at rest in the harbor. For the Governor's Cup we'll try for some mark rounding action shots or maybe another video.

Posted by Cat Sailor Paul at 8:33 PM No comments:

Friday night brought monsoon like rains that continued throughout the night. The wet weather broke by Saturday morning with some light wind and partly cloudy conditions. Race Marshall Jody Willing rousted the sleepy heads and we got busy with race preparation - inflating marks, launching the committee boat and setting marks.

Race 1 got underway around 11:00 am, after a delay caused by a good Samaritan jet skier who dutifully retrieved Mark 2 for us and brought it back to the dock, anchor and all. After resetting the mark (thanks Tom G.) the start line was a little crowded with eleven boats jockeying for prime positions. Due to simultaneous skipper errors, the cat fleet managed to get tangled bow to bow behind the start line with less than a minute to the start gun. Which is NOT a good way to start a race - Note: No protests were lodged, since us cat folks are an amicable lot and we'd rather just get out there and beat those old tech mono-hulls around the race course!

Bruce Lee seemed to be sailing a different race (or least in different wind!) as he and crew Robin smoked the fleet and pulled a horizon job on us - finishing a full 15 minutes ET ahead of the second place boat!

A protest was filed at Mark 1 when a certain Skipjack skipper was certain a certain Buccaneer skipper touched the mark with his jib. After much debate and playing about with colorful plastic models it was determined that no foul occurred and the protest was cancelled.

Race 2 was a brutal 64 minutes ET, for the fastest boat, with continuous power boat wakes pounding the fleet for the last two legs. But it did set a record for at least the last ten years since this reporter has been recording race times - 13 small boats and 3 big boats raced! That's incredible! It looked like a regular yacht club or something close to it. Tom Harrison took 1st place on CT with steady sailing in his sleek new Lido 14.

For Race 3 we postponed dinner (a huge sacrifice for hungry and thirsty sailors by the way!) and awaited the storied 6 PM August wind. It arrived on schedule and we managed to get started before it faded. Bruce and I beat Tim across the finish line, but not by enough to beat the handicaps.

The Mexican themed potluck dinner was outstanding with some creative dishes and tasty IPA to wash it down with.

The best wind of the day came after dark around the campfire. Now, there's a Challenge Cup idea - go to West Marine and get yourself some of those handy AA battery powered running lights, bring a flashlight and presto - race at marine twilight.

On Sunday morning we held another Challenge Cup race. Previous one this season went undocumented as the fleet cats went out for a little speed testing! Dave Johnson and Elayne Hunter, aboard the Buccaneer, showed us how to sail the last two legs with no wind - at least none you could see or feel.

Thanks to Jody Willing for Race Marshall duties and to Tom Gould for use of his most excellent river/committee boat.

Teamwork plug - For these big events it sure does help when everyone pitches in and spreads the load for race prep, meal set up, clean up and take down - we have no paid employees to do the work, so we rely on your work ethic and readiness to volunteer.