Sailing in San Diego with a bunch of year round sailors was an eye opening experience. For starters, we partook in 20 races in 5 days, in steady 10+ knot winds every day joining a fleet of 27 Buccs.

We began the day arriving at Mission Bay Yacht Club at 10 AM, with time enough to check out our boat (the pintals somehow loosed up every day), launch via a winch (just like at our club), sail to the wind ward mark, launch the chute, jib, retrace it then arrive at the starting line 10 minutes prior to the noon start.

The 27 Bucc fleet was divided into an A & B class. We originally signed up to race in the A class, but after the first practice race (there were 4 practice races on Monday) the realization that we were way out of our class hit home and switched to the B class. The B class had 12 boats in it and everyone knew how to sail well.

The Starts were awesome! Swiper, #5060, (an 1985 boat) could not point as high as most of the other boats and we got “heading up” at the start and with a boat directly on our starboard had no place to go but into irons. Needless to say we learned from this start and thereafter stayed away from the middle of the pack and focused on a different starting technique. We timed the starts just right so that we arrived last to the starting line and cut in just port of the committee boat on a starboard tack, and it worked time and time again. Starting this way allowed me stay on starboard tack or if I was headed up, I tacked to port and continued on my way. Our Big Lake starts prepared us well for this level of competition, though the A class starts were much more technical.

Elayne and I sailed well to weather, often in the middle of the pack, once leading the pack and yes, a couple of times trailing the pack. We were always on the verge of having too much energy and had to apply the Cunningham on some runs to spill some wind. The technique on this leg was to sail flat and keep up the boat speed, which required some slight easing of the main sail and slight heading up, into luff, then powering up again, it was awesome.

Unknown to me, there were some major rule changes on 2009, like its now a 3 boat length from the mark to establish an overlap and also, its much harder to come to the mark on a port tack with the goal of tacking over to starboard at the last moment (windward mark to port) and squeeze in (that is now a bad idea).

The course was beat to wind, then run back to the starting line, then do it again, then maybe again a third time. There was not a reaching leg, though everyone reached, then jibed the chute, then reached back to the start, no one ran directly downwind.

So far so good, Elayne and I were competitive up to this point, but now it was time to fly the chute and that was our downfall. We always lost ground on the lee leg. We could launch the chute fine, but everyone else ran the chute much better than us and also most others could jib it better than us, but we were learning. Once we overshot the lee mark because of problems retrieving the chute, but we finally got it in and continued the race.

Each day we had 4 races and they ended about 3:30 each day. After that all the boats headed to the hoist and were pulled out of the water, sails let down, covers put on and the boats put to bed. Now time for dinner, suds and some great takillya, then to off to bed.

Monday, Tuesday, Wednesday and Thursday were the same with sunny days and temps in the 80’s coupled with steady 10-12 knot winds, what a wonderful place to sail. After 3 days of racing (not counting Monday’s practice race day) Elayne and I were tied for 11 th place with the 9th place boat 7 points ahead of us. Now the 9th place boat was crewed by an elderly guy and gal and I thought: “I’m not gonna let a team in their late 60’s beat us”, and we did sail well on the last day but ended up 2 points behind the 9th place boat.

Overall, it was a great time, so much so that Elayne and I are already planning on attending next year, same time but located on the East Coast, in Maryland in some river that dumps into the Chesapeake bay (Geoff and Cathy, that may be near your old sailing ground). Everyone down there was friendly and helpful and as Alaskans, we were treated like Rock Stars.
Posted by Onthewater at 2:46 PM 4 comments:

Fifty Places to Sail Before You Die

From a recent USA Today article -

10 great places for sailors to take a brand-new tack
Posted by Cat Sailor Paul at 9:33 AM No comments: 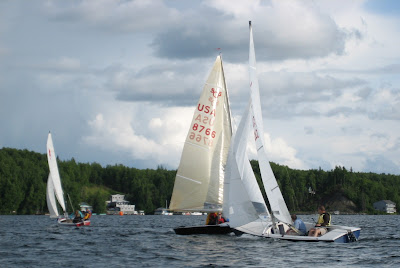 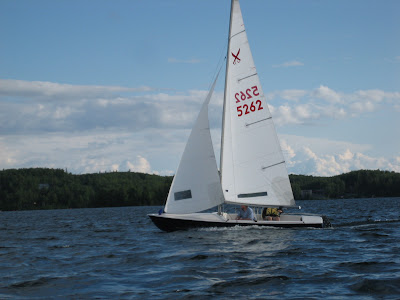 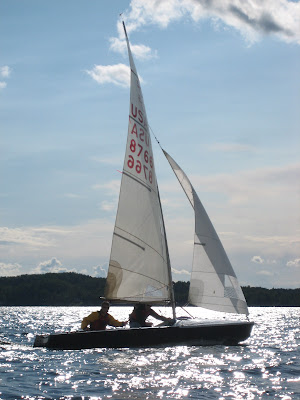 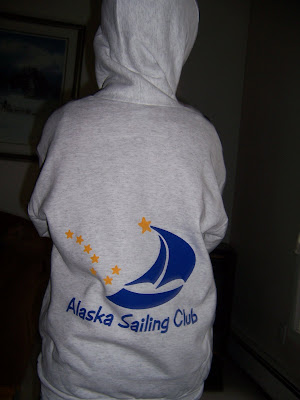 Posted by aklalonde at 11:22 AM No comments: 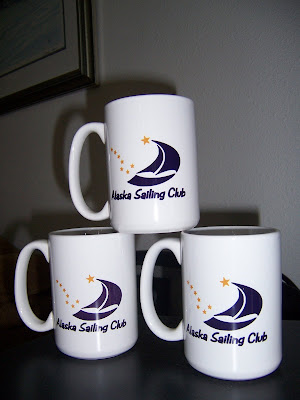 Posted by aklalonde at 11:21 AM No comments: 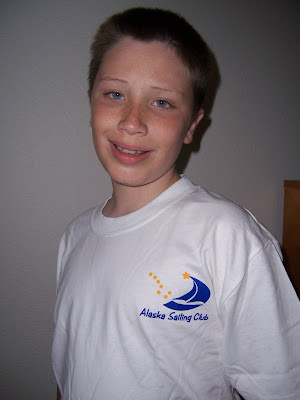 Posted by aklalonde at 11:19 AM No comments: 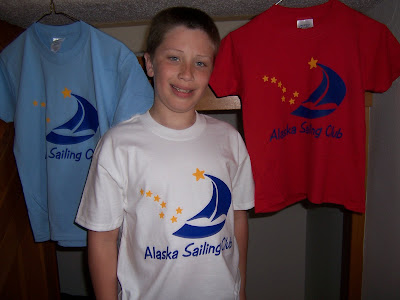 Posted by aklalonde at 11:16 AM No comments:

ASC SHIRTS and MUGS for sale

Yes, ASC has logo wear! We have t-shirts available now in white for adults, size S - XXXL, and can take orders for red or light blue if that is your preference. We just received some children's shirts, size S - L in white, red, and light blue. We also had a small number of kid's hooded sweatshirts made up , they are gray with the ASC logo on the back, sizes S - XL (The XL would fit a small adult). All t-shirts are priced at $15 and the sweatshirts are $25.

We are having some special "Firecracker Regatta 2009" t-shirts made up and you may pre-order these by emailing Tina at aklalonde@aol.com The design may also be placed on a tank top if you prefer. The cost for these is $15 and they will be available for pick up on July 3 at the Firecracker Regatta. Respond soon if you want one so we have an idea of how many to have made up in each size.

By Elayne Hunter, reporting from the Buccaneer 18 North American Championships

These Buc sailors are fun and eager to talk sailing, rigging, trimming and racing. We know you'd all be loving it. The bay is perfect with steady winds (12 knots today) and shelter from the chop. Upwind, downwind and back and forth in varying amounts for racing.

Our borrowed boat weighed in at 705 #s only 200 # excess weight (Jay we understand this can be a characteristic of the Glousters) and the line on the vang has broken in 2 races. Lots of adjustments and repairs and recoveries on the fly.

We'll be back with tales to tell of successes and challenges. Today people were talking about sailing 4 races and neither of us can remember more than 3. What's up with that?

The weather is just around 70°F.

Posted for Dave and Elayne by Paul Willing

Posted by Cat Sailor Paul at 6:38 AM No comments: 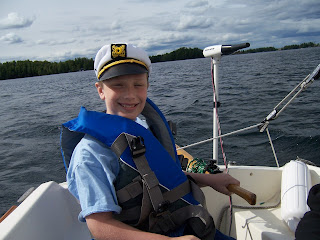 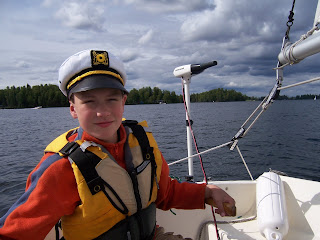 Posted by aklalonde at 1:03 PM No comments:

Get the Sailwave results sheet here.
Posted by Cat Sailor Paul at 6:11 AM No comments:

Wednesday was hot, hot, hot, but not very wet or wild. I noted 80°F on my car thermometer all the way to Big Lake. Upon arriving around 5:00 pm I set to working on my rudder upgrade kit (some filing required!). Contrary to web weather reports (10 mph???) there was absolutely no wind. That remained unchanged as the racers arrived and began launching boats for 2009’s first Wet Wednesday series.

The zero wind conditions remained unchanged as Race 1 started. I remained onshore working on my rudder fittings. Occasionally I would look up to see how things were going. Later I would look up and things looked exactly the same! I started to feel better about missing the race and continued working away in the shade – it looked pretty darn hot out on the water in the direct sun..

This all brought the mind the famous quote from The Rime of the Ancient Mariner by Samuel Taylor Coleridge:

"We stuck, nor breath nor motion; As idle as a painted ship. Upon a painted ocean. Water, water, everywhere…"

Wind finally arrived around 9:00 pm and the boats literally flew around the course – compared to being parked for an hour and a half.

This brought to mind another quote, from Papa Wallenda the great tight rope walker:

"Life is on the wire, the rest is just waiting."

That could be paraphrased for sailors to:

"Life is on the water-sailing, the rest is just waiting."

Unfortunately, they had to throw out the speedy 2nd race due to the windward mark being a navigation hazard.

Get the Sailwave results sheet here.


Posted by Cat Sailor Paul at 1:12 PM No comments: 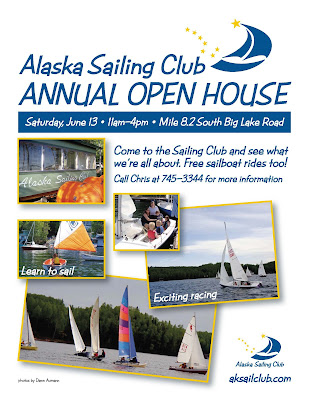 Get a full page pdf version of the Open House Flyer here. Or just click the image above for an enlarged view.

Posted by Cat Sailor Paul at 9:13 PM No comments: 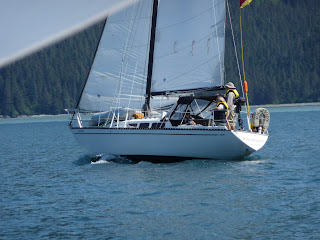